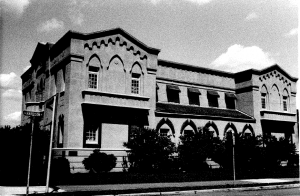 The Milwaukie Masonic Temple is one of the most unique buildings in Downtown. It is a perfect example of 20th Century Gothic Revival, and the only example in town. Notice how the building is similar to City Hall, in the Modern Style, but with Gothic details like the pointed arch window surrounds and door openings. The major focus point, of course, is the front entry. Look at the design detail; its design is intended to make a statement about Masonic importance with allure and foreboding. Almost all Masonic Lodges and temples are historically registered landmarks in their communities and this is no exception.

The Story of Seth Lewelling 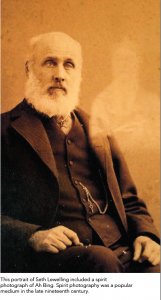 I am the man that spread what is known as the fruit tree business all over the Pacific Northwest and Northern California. In fact, you can trace my original tree grafts back to almost all of the fruit trees in those areas.

You are now standing on what was my old orchard. In fact, until 1912 when they expanded Main Street, my 1st Bing cherry tree stood at the intersection of Main and Harrison. My Peach tree also stood in the City Hall parking lot until 2006. The mayoral gavel used to this day is made from that tree. See, I still get a residual bang from my fruit trees!

I cannot begin my life story without mentioning my brother Henderson. Henderson came from Iowa in 1847 with 700 grafted trees and started his nursery where Waverly Country Club is today. Now, I do not want to say that Henderson was the lucky one, but on his wagon train journey he encountered some nasty Native Americans. They took one look inside his wagon and let him pass believing that plants and trees had good spirits and this white settler must not be that bad.

He wasn’t really a bad guy and we shared the Republican abolitionist views on slavery. In fact, even though we are brothers, he spelled his last name different from mine, at least in Oregon. Henderson had a nice Quaker home in Salem, Iowa. His home was known as a well respected stop on the Underground Railroad. Henderson was told that hired guns were coming his way to collect the reward on him and to stop his good deeds. Henderson left for Oregon the next day…..I wonder if he was still a little afraid of someone collecting that reward. Republicans who wanted to abolish slavery were also known as Black Republicans; and the name of one of my very own award winning cherries. I always said “before I am through, I will make you relish Black Republicans”

I was born in North Carolina in 1820 and traveled West in 1850, first hitting California then settling here in Milwaukie. I brought peach, plum, and other fruit tree seeds with me. My brother left for California, but I stayed and became Oregon’s first horticulturist.
Here is my list of some of the cherry varieties I brought to Oregon: Lincoln, Black Republican, Willamette, Lewelling, and of course, from my beloved Chinese worker Bing, the Bing cherry. Because of the Brits and their Oriental exclusion law I never got to see my friend after 1890. I will list the other propagations I created by fruit first: almond and grape, both named Lewelling, and Sweet Alice apple. My fruit won many awards, one at the California State Fair and in 1876 my cherries and pears were honored as the world’s premium at the Centennial Exposition in Philadelphia. For those who do not comprehend those words, I won a huge award at America’s centennial celebration and I started the Oregon State Fair as well. 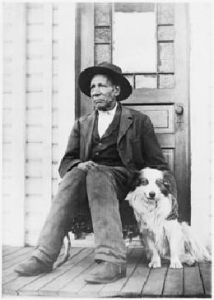 Washington was born in Frederick County, Virginia, on August 15, 1817. When his father, a slave, was sold and taken from the area soon after George’s birth, his mother left George with a white couple named Anna and James Cochran (or Cochrane) who raised him. While George was still a child, the Cochrans moved west to Ohio and then Missouri. As an adult, Washington tried his hand at several businesses in Missouri and Illinois, but was frustrated each time by discriminatory laws. By 1850 he decided to head farther west in the hope of finding more freedom. The Cochrans joined him, and on March 15, 1850, the family set out with a wagon train heading west. They settled first in Milwaukie at Lewelling’s home, but within a few years crossed the Columbia River into what would soon become Washington Territory.

In 1852, Washington began a claim where the Skookumchuck River joins the Chehalis River, becoming the fourth settler in the area where he would later found the town of Centralia. The spot had long been a home of the Chehalis Indians, and Washington recognized the river junction as a prime spot for a settlement. He cleared land, built a cabin, and began farming. Because Oregon Territory had passed a law barring settlement by African Americans, Washington had James and Anna Cochran file a claim under the Donation Land Claim Act for 640 acres in the area. When the claim was established by four years of residence and Washington Territory, which did not bar African American ownership, had come into existence, the Cochrans deeded the property to Washington.

In 1872, the Northern Pacific Railroad advancing north from the Columbia River to Puget Sound, crossed the Washington’s land. Washington recognized that his land would be a central point on the railroad between Kalama, on the Columbia, and Tacoma, on the Sound, and decided to start a town on the site.

On January 8, 1875, the Washington’s filed the plat for their town, which they called Centerville, at the Lewis County courthouse in nearby Chehalis. The initial plat consisted of four blocks platted into lots, which Washington offered for sale at $10 per lot to anyone who would settle in the town. Washington later filed additional plats, adding to the size of the town. The Washington’s gave land to their Baptist congregation for a church and cemetery, and helped build the church. They also set aside land for a public square, which became Centralia’s City Park, now named George Washington Park.

The town grew steadily. But while settlers liked the location and the favorable terms Washington offered, they did not care for the name Centerville, in part because the town was confused with one of the same name near Goldendale, Klickitat County. By 1883, the name was changed to Centralia, based on the suggestion of a settler from Centralia, Illinois. In 1886, Centralia was incorporated.

By 1889, when the Washington Territory became a state, the population of Centralia was nearing 1,000. Those were boom times and within little more than a year, the population had climbed to over 3,000 people. By 1891, George Washington had sold 2000 lots. 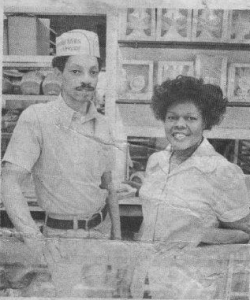 In the early 1960’s, Hurtis Mixon Hadley, Sr. began his career as a Baker’s Helper at Bohemian Bakery and Restaurant in Portland. At that time, African Americans were discouraged from joining the Baker’s Union so, after five years at Bohemian, Hurtis took his skills to Albertsons where he was accepted into the three year Oregon Baker’s Apprenticeship Program. Two years later in 1967 Hurtis became the first African American in Oregon to graduate and be state certified as a Journeyman Baker.

After completing his apprenticeship, Hurtis was promoted to Bakery Manager at Albertsons, becoming the first African American to hold that position in Oregon. While at Albertsons, he was promoted once more to Bakery Trainer and was responsible for training store directors and bakers. Despite his credentials, knowledge and success Hurtis was passed over for a District Manager position and was told “southern Oregon communities will not accept a black man in this position of authority.”

In 1977 Hurtis and his wife Dorothy Bishop Hadley, struck out on their own and purchased Milwaukie Pastry Kitchen at 10607 SE Main St. It became the first African American owned full line bakery operating in Oregon and the first African American owned business in Milwaukie. Hurtis handled the baking and produced many varieties of cakes, pastries, breads, and donuts. Dorothy ran the front counter and handled sales. After eight successful years the bakery closed, but Hurtis continued on as a Baker and Bakery Trainer at Safeway, then as a Mixer at Franz Bakery and Orowheat before retiring in 1997.